This spring was cold and wet, and windy. And in early May when we looked on our porch in the mornings we saw long strands of weeds both on the deck and hanging from the ceiling fan. A robin was trying to make a nest. Its problem was that the wind would blow the fan and then the grass would blow away. The bird would just start again.
We wondered if having a nest in our fan was a good idea; even the building of it was so messy. That lead to visions of a nest with chicks, parents keeping them warm, and the many feeding trips they'd make until the chicks became fledglings. How much guano would we have to clean, and what would the fan look like when the birds were gone? After all, all we had to do was turn on the fan, and all their work would be scattered.
But one day there was an almost complete nest, and we decided to just see what would happen. A nest on a ceiling fan keeps everything dry, but strong winds from the right direction would make it rotate, so maybe it'd just blow off. Let nature take its course, we thought. 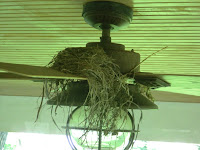 Soon, we surmised, there were eggs, and one of the robins was always on the nest. When we came out the back door, the one on the nest would fly off in a rush. We tried to be careful about coming and going, and the bad weather helped--there were few days of weather that invited us to use the porch, and when the weather stormed, the birds were more likely to tolerate us walking by. Apparently, they disliked the rain more than they feared us.. 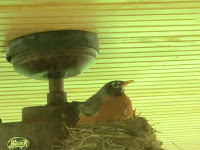 By chance, I heard on a call in show that from hatching to fledgling is only about 2 weeks for robins, and the caller was right. At first, when a bird came with some morsel for a chick, we could barely see the 3 wide open beaks above the rim of the nest, but think about how fast they'd need to grow. A lot of work for the parents. Early on, a parent would come back with, say, a huge worm, and just stuff it down the throat of a chick who seemed smaller than the meal. They had to grow from thumb size to fist sized in 2 weeks? Wow.

Our worry about mess was way over blown. When a parent left after a feeding, it would police the nest, and fly away with with what ever guano had accumulated. The chicks did seem to grow as we watched; the caller was right. One morning, there was only one bird left, and we hadn't seen the others leave.

And, it seems, once the first 2 had left, the parents did not come back to the nest, though it is likely that they stayed around the yard, watching over their brood, but one robin looks very much like another. So if, next spring, a robin makes a nest in what looks like an inconvenient spot, just enjoy the experience.
Posted by Dave at 6:29 AM